The LNER class A4 locomotives were designed by Sir Nigel Gresley for use on the top-link expresses on the East Coast Main Line from London Kings Cross. 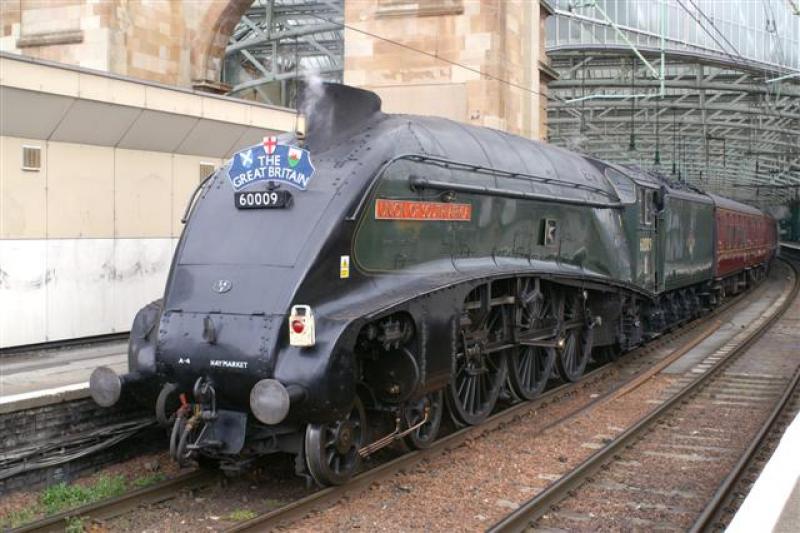 60009 waiting to start the Glasgow Central - Inverness leg of 'The Great Britain' railtour on 10th April 2007. Photo by Class47man


Thirty-five of these locomotives were built the LNER at Doncaster works between 1935-38.

Haymarket depot (64B) had and allocation of seven A4s, the remainder were based at King's Cross (34A) and Gateshead (52A).

Some of the class survived a few years longer after moving to Aberdeen Ferryhill and Glasgow St. Rollox sheds, working the '3 hour Expresses' on the Aberdeen - Glasgow Buchanan St. route.

During 1963 some of the redundant A4s from the English depots moved north for storage. When these locos had been returned to traffic, the summer of 1964 saw 14 A4s working in Scotland.

60019 was bought privately and continued to be used on main line excursions for the next 2 years. Six of the A4 class locos were preserved, although 2 of these are static museum exibits in North America.


After withdrawal from Ferryhill depot in 1966, this loco was bought by John Cameron and taken to Lochty in Fife.
From 1968 it ran on the 1.5 mile Lochty private railway, until 1973 when it returned to on the main line. After a short period in the goods shed at Kirkcaldy it went to Markinch Goods shed where it stayed until 1990 when it went to Thornton (but not the shed it is at now). It stayed at Thornton for about a year before going back to Markinch.

In 1994 60009 left its base in Scotland moving to Bridgnorth on the Severn Valley Railway.

The locomotive returned to Fife in 2007, now based at Thornton Junction shed, where it is closer to the home of its owner.

However after only a month at its new home, 60009 went south and spent the remainder of 2007 working trains in England, in particular the Scarborough Spa Express trains from York.

In 2008 Union of South Africa was used on the Great Britain II tour, again to Inverness, this time assisted by a black 5. The loco was also used on several Heart of Midlothian tours on the East Coast Main Line, unfortunately it failed twice on Northbound runs.

2009 saw more some more successful runs on the ECML, a SRPS tour to Inverness and finally a couple of circuits on the Forth Circle via Alloa on 23 of August.

On 24 August 2009 the locomotive ran south from Thornton to Crewe Heritage Centre,
with the intention of hauling a number of tours in England, however it developed superheater problems and was unable be used.

It remained at Crewe, and with it's 10 year boiler certificate expiring, work has commenced there on a major overhaul.