As part of Transport Scotland's investments work is currently taking place at Edinburgh Waverley to increase capacity and facilitate the introduction of electric services between Edinburgh and Glasgow via Bathgate and Airdrie. 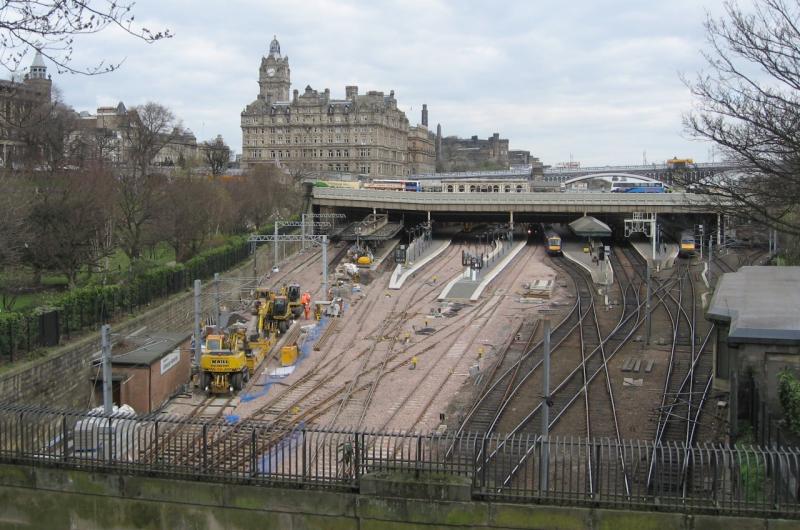 The west end throat of Edinburgh Waverley on 6th April 2007. Photo by Dysgraphyk

This work is required to

This will be delivered by

Other work will include cleaning, painting and repairing aspects of the station.

Two Contracts were placed in December 2005. AMEC SPIE Rail was awarded a £24million contract to carry out track and platform improvements, and Westinghouse Rail Systems won the £29million contract to install upgraded signalling and telecoms.

Work began in January 2006 and is expected to be completed by December 2007 when all platforms will be operational. Signalling:Edinburgh Nov 2007.

There are four planned 'work phases' during 2007. This will result in:


With the addition of the new platforms at Waverley there are some interesting facts about the station:

A number of members are recording progress with their camera

Discussion regarding the work


Associated with these works a new bay platform was constructed at Haymarket 'Platform 0', to allow some services to terminate/start there during the remodelling of the western throat at Waverley. The platform began use from December 27, 2006.

Discussion on the New Platform

Slateford Yard was also upgraded to accommodate a temporary First Scotrail servicing depot (18 month life during disruptive work at Waverley). The depot was used from 11 December 2006.