Banavie Signalling Centre has two workstations for controlling the RETB signalling on the West Highland Line:

Banavie South Workstation and Interlocking were modernised in November 2010.

Trials of RETB Next Generation commenced in April 2015, and legacy system was taken out of use at the end of July 2016.

This page describes the track layout and signalling. Stations are shown in bold type.

The Radio Channels noted below relate to the legacy radio system, and lineside signage has now been removed. The on-train RETB-NG equipment has auto tuning, only requiring a manual change between North and South areas at Upper Tyndrum.

Tokens from Garelochhead to Helensburgh Upper can only be issued by Banavie SC in cooperation with Yoker SC.

At Helensburgh Upper, down directions trains must follow the procedure for entering the RETB area, before obtaining the section token.

Up direction trains must return the token on arrival at Helensburgh Upper.


Upper Tyndrum is the change-over location between Banavie South and North RETB areas. On arrival drivers return the token, change radio channel, and follow the procedure for entering the new RETB area, before obtaining the next token.

The Intermediate TEP stop boards at Fillan and Lower Crianlarich are used for joining southbound trains at Crianlarich station.

The first train enters the Crianlarich, stops at the south end of the Up loop, and returns its token. The second train, stopped at the Intermediate TEP, can then be given a 'Loop Occupied' token and permission to proceed into Crianlarich station to attach to the first train.


The Automatic Stone Signals in the Pass of Brander are 17 semaphore signals connected by a number of wires forming a screen which runs along the top of the railway slope on the hill side of the line. With the exception of the signals at each end of the section, each signal post has both Up and Down arms. As long as the screen wires remain intact, the signals remain clear, but in the event of a stone falling from the mountain and one or more wires being broken, Up and Down signals go to danger. A more detailed description can be found on Railsigns.co.uk.

Trains at Oban normally arrive and depart from Platform 3 ('Up Platform' in the RETB system). 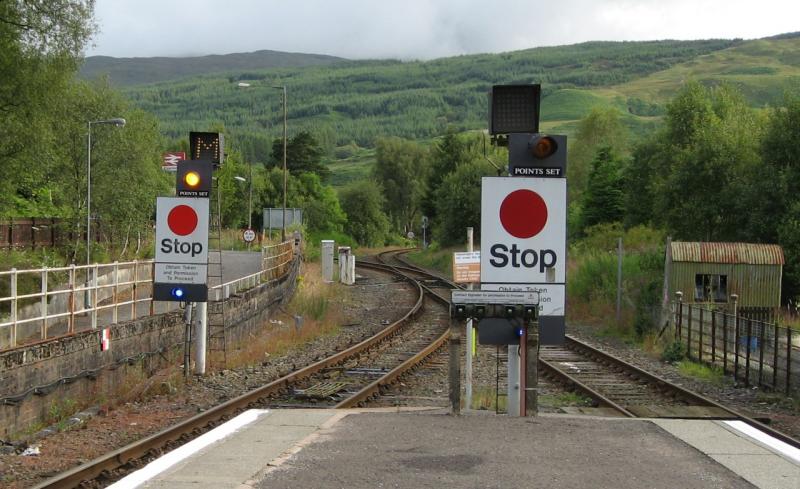 The driver of the train in the down loop (out of picture) has pressed the plunger to set the junction points for the main line north, and has returned to his cab to contact the signaller at Banavie for permission to proceed.

BanavieSth.jpg » The South RETB workstation in Banavie Signalbox, which controls from Helensburgh Upper to Oban including Crianlarich. Photo taken in June 2005. The workstation was modernised in 2010. (See photo on Flickr) Photo by Aitken
Created by Dysgraphyk and last modified by him at 00:23, 03 of December 2018.