The Glasgow Subway is owned and operated by SPT.

Subway train at Govan in 2011. Photo by aaardvark


The Subway forms a 10.5km circle in the centre-west of Glasgow. All of the passenger railway is underground, contained in twin tunnels, with trains running clockwise on the 'outer' circle and anticlockwise on the 'inner'.

The tunnels are very small, only 3.4m in diameter, and the trains run on an unique track gauge of 1220mm (4 feet from rail-to-rail).

It started in 1896 as a cable-hauled system, but was converted to electric 3rd-rail operation in 1935. The Subway continued to operate with its original rolling stock until 1977, when the system was closed for modernisation.

The railway in its present form reopened for passenger use on 16 April 1980. A maintenance depot and control room was built at Broomloan as part of the modernised system.

It was branded as the 'Underground' from 1936 onwards, until SPT decided to revert to the popular 'Subway' name in 2002.

As was » The Glasgow Subway station in the old Transport Museum at the Kelvin Hall taken in March 2010 just before removal down to the riverside. Photo by Deepol01

Waiting their turn » Underground stock at Broomloan Depot in Govan in May 1979. Photo by Deepol01

Thirty-three new vehicles were built for the modernised system by Metro-Cammell of Birmingham and delivered between 1977 and 1979.

Each car is 12.58 metres long, has 4 traction motors and a driving cab at one end and has a maximum speed of 54km/h.

Trains are normally formed of three cars, the maximum length of train that can be accommodated in each station.

The formation is a 'power car' at each end, and either a 'trailer car' or freewheeling 'power car' in the centre. A three-car train has a seating capacity of some 112 places, and space for additional 165 or so standing passengers. 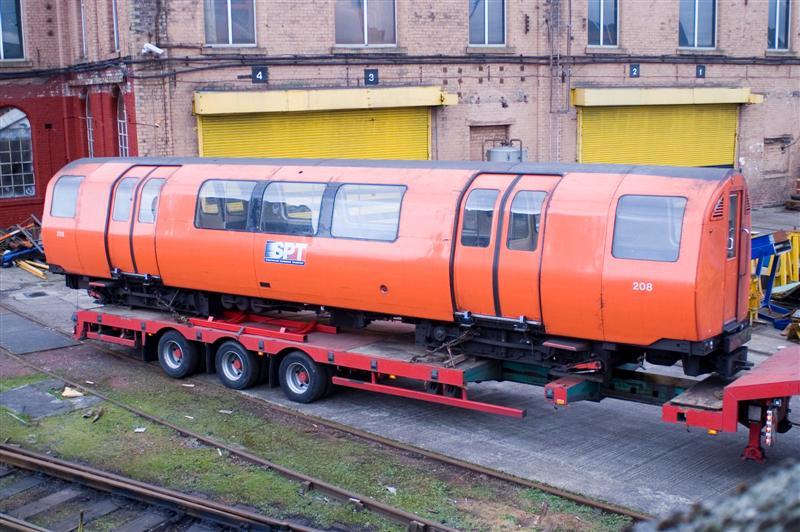 Subway trailer car 208 arriving at Glasgow Railcare for refurbishment in 2007. Photo by class47man

When new, the trains carried a light orange livery with a white white band, and 'GG Trans-clyde' branding behind cabside windows. After a few years they were painted in a darker orange, 'Strathclyde Red', but without the white band.

From 1983, the livery featured black window pillars and 'Strathclyde Transport' branding on middle of the bodyside. In the late 1990's 'SPT' branding in blue, red and white was used.

To celebrate the Subway's centenary in 1996, two cars were turned out in lined Carmine and Cream livery, the original colours of the Glasgow District Subway.

The final repaints in to the 'Strathclyde Red' livery featured yellow doors and black SPT logos.

Between 2006 & 2011 the SPT Subway livery was Carmine and Cream, divided by an light orange stripe, and full orange ends on the driving cabs.

From 2011 onwards the stock returned to the Orange livery, now accompanied by patches of white and grey to give a more modern look.

To celebrate the Subway's 120th in December 2016 special liveries were applied to cars nos. 101 & 130 (plus 'Celebrating 120 years' text applied around the Subway logos on trailer 201). District Subway colours were given to 101 and no. 130 was given a scheme of grey with orange doors, inner/outer line lining & a dark grey front - styled in the fashion of the upcoming Stadler driverless subway trains. It's to be noted the set isn't always in a set formation as cars are separated when required maintenance.

There are also various 4-wheel battery electric locos (mostly built by Clayton Equipment) used for hauling engineers trains, or moving trains around the maintenance depot. Three were named after characters from a Bud Neill cartoon strip. 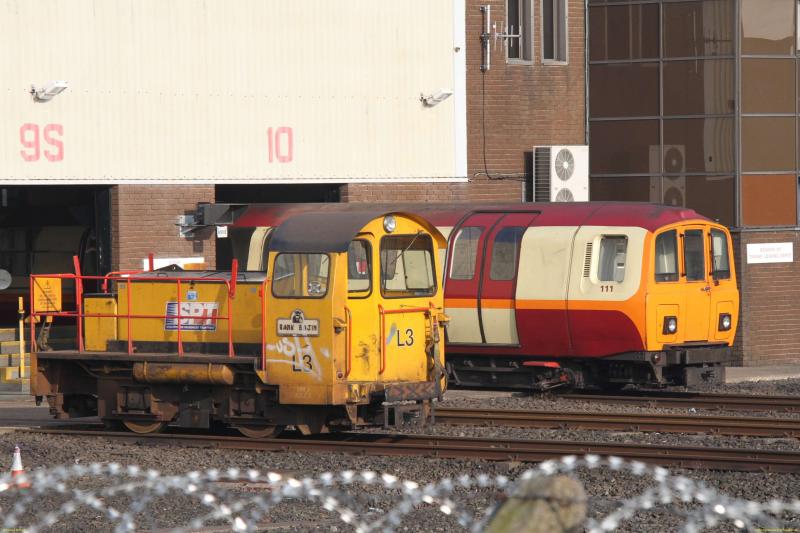 L3 and 111 at the Subway depot at Broomloan, February 2010 Photo by Donald Stirling

The Future of the Subway


On the 4th March 2016, it was announced by SPT that as part of the Glasgow Subway modernisation and refurbishment plan that this would include the introduction of entirely new Subway Trains that are to be designed by Stadler. These have been planned to be driverless and this also will warrant a complete resignalling of the system. With a value of £200 Million being sunk into the project, it was originally estimated to be completed by 2020.

There will be 17 new trains, which are 4-car units. The outer cars (A & D) are approximately 12 metres long, the centre cars (B & C) are around 7 metres long with only one bogie. The trains feature wide walk-through gangways between the cars.

The first Stadler built train was delivered to Broomloan on the 4th May 2019.
By July 2019 three trains (301/302/303) had arrived to start testing and training, based at a new temporary facility built at Edmiston Drive, to the south of Broomloan. The other trains will be delivered when the testing is complete.

It is now hoped the new trains will enter service sometime during 2022.