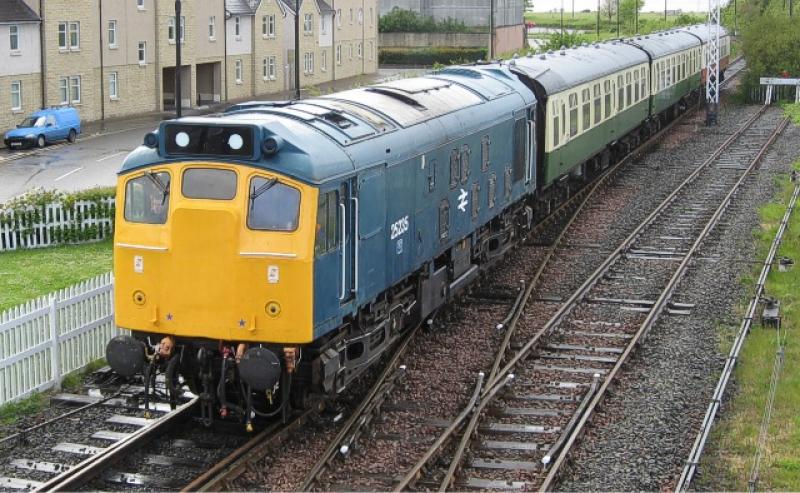 Preserved 25235 arrives at Bo'ness after working the last trip to Birkhill on Sunday 6th May 2007. Photo: Dysgraphyk

Class 25s had worked across the border into Scotland for several years before the Scottish Region received its first allocation of class 25s.

These were D7611-23 (25261-273) delivered new to Eastfield during 1966, to replace steam locos on freight in Ayrshire. These 13 locos had square recesses under the drivers windows for tablet catchers (never fitted). Later in 1966 eleven more, D7698-7609, moved north from Tinlsey to Eastfield and Haymarket.

In the early years of the Edinburgh - Glasgow Push & Pull service, these locos often substituted for class 27s.

Many more class 25s were transferred to Scotland in the 1970s as replacements for class 24s.

The class 25s could be found on most routes in Scotland, mostly on freight, but also passenger workings in place of class 27s, particularly the Glasgow - Dundee route.

The 25/0 locos 25001-025 were not equiped with boilers or air brakes, and had non-standard BTH traction motors (others had AEI motors). They were progressively withdrawn between 1976 and 1980.

The influx of Class 37s from 1978 onwards enabled the Scottish Region to remove the class 25s from its fleet.

The last twenty-two 25's based at Eastfield and Haymarket were transferred south (to Crewe, Carlisle and Longsight) in October 1982.

Class 25s continued to visit southern Scotland until final withdrawal of the class in March 1987.