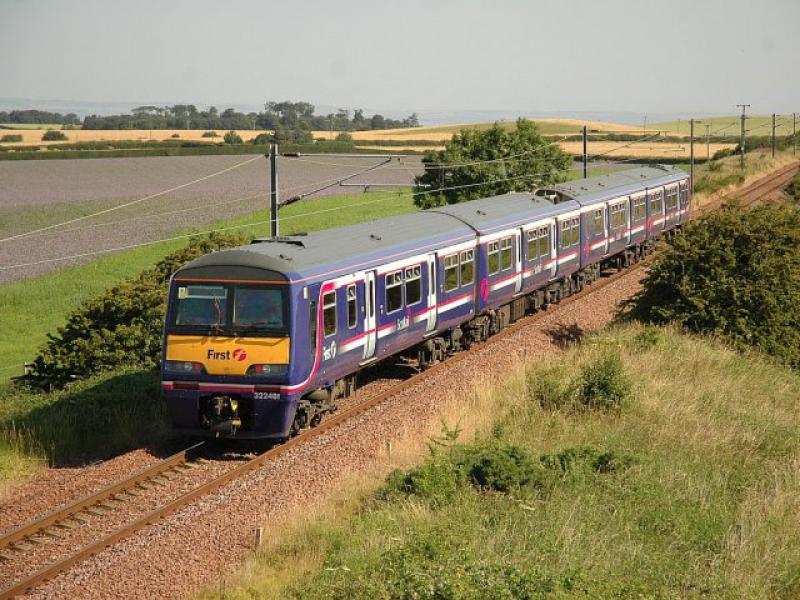 
Class 322 units have been in use with ScotRail on the North Berwick branch services since Autumn 2005, replacing Class 90 and DVT Push-Pull sets. The 322s were also previously used on these services between 2001 and the Summer of 2004, replacing the old slam door Class 305 EMUs.

Their previous term in Scotland was meant as a short term measure by National Express while they looked into a longer term replacement for the Class 305s. The 322s were on loan from another National Express franchise, WAGN, which National Express lost in 2004. This meant that the 322s had to be returned back down south. After their return, National Express put together push-pull loco-hauled sets using DB Schenker Class 90s and ex-Virgin Mk3s. When First Group won the franchise, they successfully negotiated the return of the 322s to Scotland on a sub-lease from National Express East Anglia. They were refurbished for use on the North Berwick branch, an arrangement expected to subsist until May 2011.

The Class 322 fleet had a refurbishment at Wabtec in Kilmarnock, carried out between July 2005 and February 2007.

The Class 322s were to be returned to NXEA at the end of the Winter timetable in May 2011 and are to be replaced on North Berwick services by Class 380s, however the Class 322 are now expected to transfer to Neville Hill, with Northern. The last service operated by a Scotrail Class 322 was the 0756 North Berwick-Edinburgh service on the 2nd August 2011 and all units are now being transferred to Northern Rail.