The British Rail Class 86 is an electric locomotive built during the 1960s. One hundred of these locomotives were built by English Electric at their Vulcan Foundry, Newton-le-Willows, or British Rail (BR) at their Doncaster works. The class 86s were built primarily to haul trains on the new West Coast Main Line between London Euston, Birmingham, Crewe, Manchester Piccadilly, Liverpool and later Preston and Glasgow.

The last operators to regularly use class 86s in Scotland were Freightliner & Caledonian Sleeper.

Virgin Cross Country had used Class 86s on services from Glasgow Central and Edinburgh to Birmingham until September 2002. 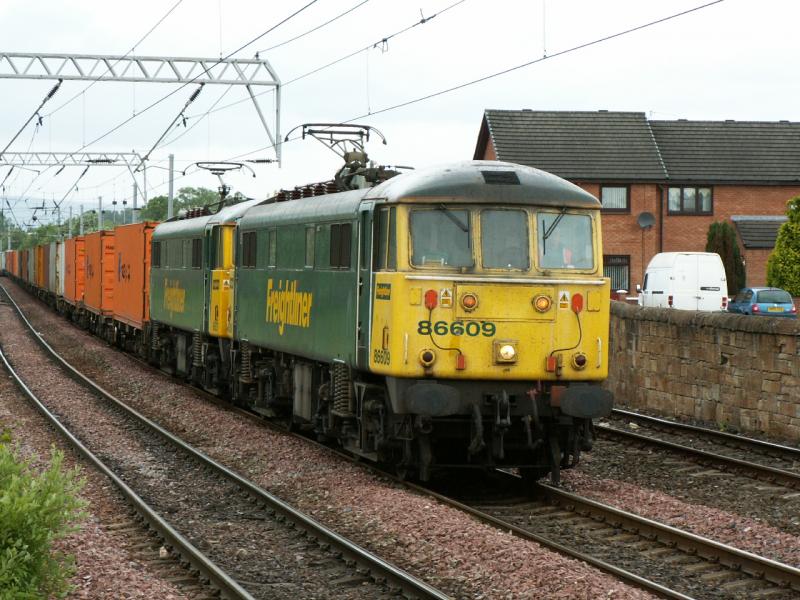 
They operated pairs of class 86/6s on their intermodal trains between Ipswich and Crewe and between Crewe and Coatbridge.

By 2020, the Class 86/6s had only one regular diagram into Scotland. And this went over to pairs of class 90s towards the end of the year.

The last operational Class 86s in the Freightliner fleet were taken out of service in February 2021.


In 2015 Electric Traction Ltd hired a number of AC electric locomotives to GB Railfreight to move empty coaching stock to and from London Euston on behalf of Serco Caledonian Sleeper Limited. Among these were 86101 "Sir William A Stanier FRS" & 86401 "Mons Meg", the latter being named so upon entering service for CS.

As well as occasional appearances hauling the revenue earning sleeper, both locos have seen use working the empty sleeper stock to and from Glasgow & Polmadie Depot since 2016.

Caledonian Sleeper use of Class 86s came to an end with the introduction of MK5 coaching stock in October 2019.

Two locomotives (numbered 86901/902) were converted into mobile load-banks to test the electricity supply at selected locations around Britain. The locos can still move under their own power and are also used to clear ice off the overhead lines.

The pair visited Scotland for the first time on 14 July 2005, and were used later in the month on the reinstated Larkhall branch. As of 2013, they are currently stored at Derby RTC and were scrapped in late 2016/early 2017.

Created by brucekitchener and last modified by Dysgraphyk at 14:35, 28 of February 2021.