Twenty-two Class 55 "Deltics" were built by English Electric in 1961-62 to operate express passenger services on the East Coast Main Line from London King's Cross to Edinburgh.

These 100mph locomotives were powered by two 1650hp Napier 'deltic' engines, and at 3300hp were the most powerful diesel locomotives in the British Rail fleet.

Eight of the Deltics were based at Haymarket depot (64B), the others shared between Finsbury Park (34G), London and Gateshead (52A), on Tyneside.


From May 1979, the new timetable introduced HSTs on to all daytime King's Cross - Scotland services and Deltics found themselves reduced to semi-fast services between London and York and Hull, whilst continuing on the overnight sleeper services.

At this time the Haymarket and Gateshead based Deltics were transferred to York.

However, this period did see regular use north of Edinburgh to Aberdeen for the first time.

January 1980 saw the first Deltics condemned, although most of the class lasted until December 1981.

The most remarkable workings of the last full year saw 55021 used twice on Edinburgh to Oban 'Merrymaker' excursions formed of E&G push-pull stock. This operated on Sundays 2nd and 23rd of August, 1981.

The final British Rail workings were for the Deltic Scotsman Farewell tour on 2nd January 1982.


Back on the Main Line


D9000 was brought from Old Oak Common Depot to Glasgow Works on 08 August 1996, to prepare it for a return to main line use.

Movements of Deltics in Scotland Since 1996 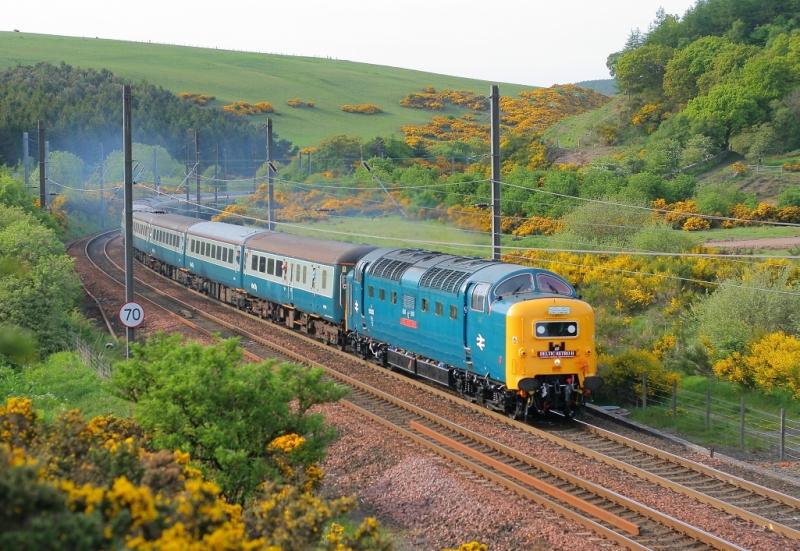 55022 runs through the gorse filled cutting at Penmanshiel on 31.05.10, while working the 1Z88 Edinburgh - Sheffield Photo by Steve_B