ScotRail operates a fleet of forty Class 158 "Express" DMUs. These are allocated between Corkerhill Depot (formerly Haymarket) and Inverness Depot. The units are primarily used on long-distance rural services as well as short distance commuter services within the Central Belt.

The Class 158s underwent a refurbishment programme at Glasgow Works, Springburn between 2015 & 2018. This included exterior repainting, a remodel of the interior seating arrangements and the new saltire moquette to go with. The Inverness sets were treated first, and the then Haymarket based ones were secondary.

158867, 158868, 158869 and 158870 arrived at Haymarket on 14 December 2007 on long-term loan from Northern, an arrangement which was due to end in June 2010. However, a new agreement was made with the ROSCO and the units formed part of the ScotRail fleet and remained with ScotRail indefinitely. In 2010 the Angel Trains fleet were repainted into the TS Scotrail Saltire livery (and eventually fitted with the new standard oval LED lights), and all 8 units remained in Scotland until 2018 when they transferred to Arriva Rail North.

The first 2 158s (158870/871) left Scotland on 5th January and later in the year, due to the sufficient arrival of 385 EMUs for Scotrail by the introduction of the new winter timetable in December 2018, the remaining sets were transferred south to Heaton Depot: 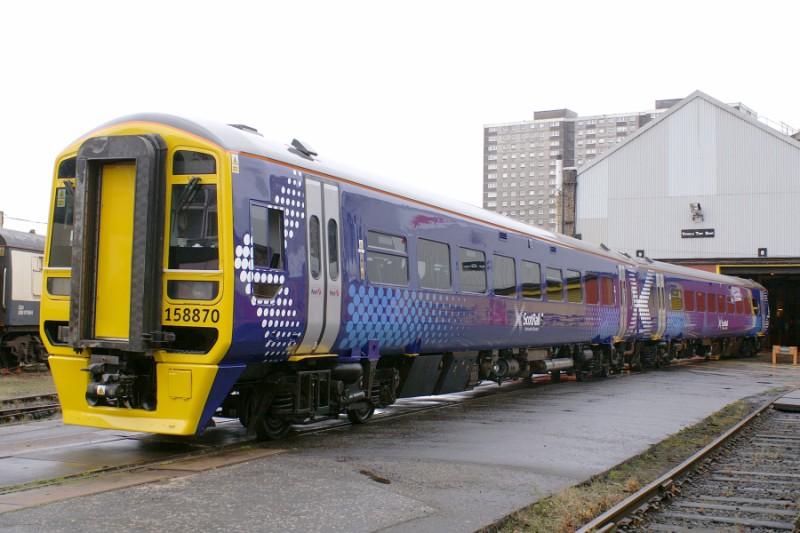