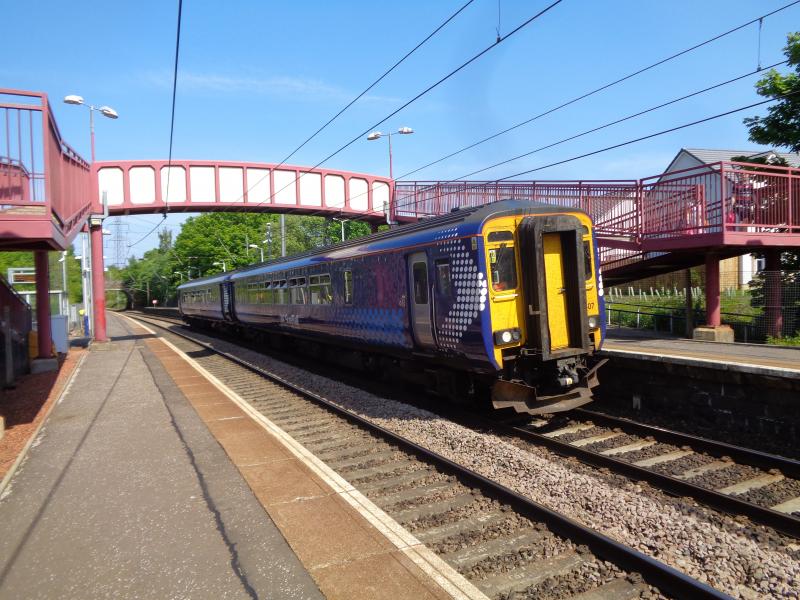 156 507 at Curriehill Photo by stanley
The fleet was originally split between SPT sponsored services and other ScotRail services. As such, twenty-eight of them were in SPT Carmine and Cream livery, and twenty in First ScotRail blue livery. With the transfer of SPT's rail powers to Transport Scotland and the rebranding of the ScotRail franchise to a unified livery, the entire fleet of twenty-eight Carmine and Cream 156s was repainted into the new ScotRail saltire livery. As of July 2019 all 45 of the ScotRail 156s carry saltire livery following the PRM modifications.

In December of 2018 with the start of the new timetable, five of Scotrail's 156 'Barbie' units were to transfer south for a new life with Northern at Heaton Depot in Newcastle. These are as follows:

156478 had it's RETB equipment removed during 2015, but was re-fitted following the completion of refurbishment and accident repairs. 156478 returned to service in October 2016. The unit is now owned by Brodie Engineering, Kilmarnock.

DMSL vehicle of 156437 (52437) after being modified to include the fitment of a new universal PRM compliant toilet. Photo by JModulo

From late 2016, ScotRail Class 156 units visited Glasgow Works to receive PRM-TSI modifications, part of which included the fitment of a new universal disabled toilet, upgrading of wheelchair spaces from 1 to 2, call for aid points and a new passenger information display system. This work also involves a full repaint externally and internally, and a full interior refresh including new seats, carpets, tables, plug sockets and LED lighting. Units 156432, 156462, 156467, 156501-156503 and 156505-156514 were completed however retained original seating and were to be replaced at a later date. Brodie's refurbished and owned 156478 also retained its original seating after refurbishment however it is expected to retain this and will therefore be the only example. The entire project was completed in July 2019, with unit 156445 being the last.

Interior of the toilet area after being modified to include the fitment of a new universal PRM compliant toilet and upgrade of wheelchair space from 1 to 2. Photo by JModulo

Class 156s have also previously operated the following routes throughout the years: